"By 1891 the native population had been reduced to 2.5% of its original numbers and 97.5% of the aboriginal land base had been expropriated. Hundreds upon hundreds of native tribes with unique languages, learning, customs, and cultures had simply been erased from the face of the earth, most often without even the pretense of justice or law." Peter Montague

There are many facets of genocide which have been implemented upon indigenous peoples of North America. The list of American genocidal policies includes: Mass-execution, Biological warfare, Forced Removal from homelands, Incarceration, Indoctrination of non-indigenous values, forced surgical sterilization of native women, Prevention of religious practices, just to name a few.

When Christopher Columbus “discovered” the Americas in 1492, on his quest for gold and silver, the Native population, which he erroneously called Indians, numbered an estimated 15 million who lived north of current day Mexico. It was, by all considerations, a thriving civilization. Three hundred and fifty years later, the Native American population north of Mexico would be reduced to less than a million. This genocide was brought upon the Natives by systematic mass murder and also by disease, notably smallpox, spread by the European colonists.  When Columbus returned in 1493 he brought a force of 17 ships. He began to implement slavery and mass-extermination of the Taino population of the Caribbean. Within three years five million were dead.

Mass killing did not cease, however, after Columbus departed, expansion of the European colonies led to similar genocides. "Indian Removal" policy was put into action to clear the land for white settlers. Methods for the removal included slaughter of villages by the military and also biological warfare. High death rates resulted from forced marches to relocate the Indians.

The Removal Act of 1830 set into motion a series of events which led to the "Trail of Tears" in 1838, a forced march of the Cherokees, resulting in the destruction of most of the Cherokee population." The concentration of American Indians in small geographic areas, and the scattering of them from their homelands, caused increased death, primarily because of associated military actions, disease, starvation, extremely harsh conditions during the moves, and the resulting destruction of ways of life.

During American expansion into the western frontier, one primary effort to destroy the Indian way of life was the attempts of the U.S. government to make farmers and cattle ranchers of the Indians. In addition, one of the most substantial methods was the premeditated destructions of flora and fauna which the American Indians used for food and a variety of other purposes. We now also know that the Indians were intentionally exposed to smallpox by Europeans. The discovery of gold in California, early in 1848, prompted American migration and expansion into the west. The greed of Americans for money and land was rejuvenated with the Homestead Act of 1862. In California and Texas there was blatant genocide of Indians by non-Indians during certain historic periods. In California, the decrease from about a quarter of a million to less than 20,000 is primarily due to the cruelties and wholesale massacres perpetrated by the miners and early settlers. Indian education began with forts erected by Jesuits, in which indigenous youths were incarcerated, indoctrinated with non-indigenous Christian values, and forced into manual labor. These children were forcibly removed from their parents by soldiers and many times never saw their families until later in their adulthood. This was after their value systems and knowledge had been supplanted with colonial thinking. One of the foundations of the U.S. imperialist strategy was to replace traditional leadership of the various indigenous nations with indoctrinated "graduates" of white "schools," in order to expedite compliance with U.S. goals and expansion.

Probably one of the most ruinous acts to the Indians was the disappearance of the buffalo. For the Indians who lived on the Plains, life depended on the buffalo. At the beginning of the nineteenth century, there were an estimated forty million buffalo, but between 1830 and 1888 there was a rapid, systematic extermination culminating in the sudden slaughter of the only two remaining Plain herds. By around 1895, the formerly vast buffalo populations were practically extinct. The slaughter occurred because of the economic value of buffalo hides to Americans and because the animals were in the way of the rapidly westward expanding population. The end result was widescale starvation and the social and cultural disintegration of many Plains tribes.

This did not end with Columbus’ departure, the European colonies and the newly declared United States continued similar conquests. Massacres occurred across the land such as the Wounded Knee Massacre. Not only was the method of massacre used, other methods for “Indian Removal” and “clearing” included military slaughter of tribal villages, bounties on native scalps, and biological warfare. British agents intentionally gave Tribes blankets that were intentionally contaminated with smallpox. Over 100 thousand died among the Mingo, Delaware, Shawnee and other Ohio River nations. The U.S. army followed suit and used the same method on the Plains tribal populations with similar success.

The Europeans saw themselves as the superior culture bringing civilization to an inferior culture. “At the basis of most American Native beliefs is the supernatural was a profound conviction that an invisible force, a powerful spirit, permeated the entire universe and ordered the cycles of birth and death for all living things.” Beyond this belief in a universal spirit, most American Indians attached supernatural qualities to animals, heavenly bodies, the seasons, dead ancestors, the elements, and geologic formations. Their world was infused with the divine – The Sacred Hoop. This was not at all a personal being presiding ominpotently over the salvation or damnation of individual people as the Europeans believed.

For the Europeans such beliefs were pagan. Thus, the conquest was rationalized as a necessary evil that would bestow upon the heathen “Indians” a moral consciousness that would redeem their amorality. The world view which converted bare economic self interest into noble, even moral, motives was a notion of Christianity as the one redemptive religion which demands fealty from all cultures. In this remaking of the American Indians the impetus which drove the conquistador’s invading wars not exploration, but the drive to expand an empire, not discovery of new land, but the drive to accumulate treasure, land and cheap labor. 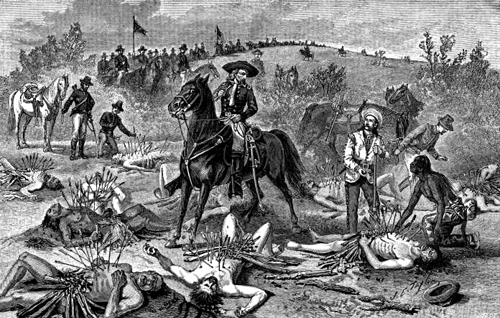 Strategies of targeting American Indian children for assimilation began with violence. Forts were erected by Jesuits, in which indigenous youths were incarcerated, indoctrinated with non-indigenous Christian values, and forced into manual labor. Schooling provided a crucial tool in changing not only the language but the culture of impressionable young people. In boarding schools students could be immersed in a 24 hours bath of assimilation. “The founder of the Carlisle Indian Industrial School in Pennsylvania , Capt. Richard H. Pratt, observed in 1892 that Carlisle has always planted treason to the tribe and loyalty to the nation at large. More crudely put, the Carlisle philosophy was, “Kill the Indian to save the man.” At the boarding schools children were forbidden to speak their native languages, forced to shed familiar clothing for uniforms, cut their hair and subjected to harsh discipline. Children who had seldom heard an unkind word spoken to them were all too often verbally and physically abused by their white teachers. In short, “there was a full-scale attempt at deracination — the uprooting or destruction of a race and its culture.” A few American Indian children were able to run away, others died of illness and some died of homesickness.

The children, forcibly separated from their parents by soldiers often never saw their families until later in their adulthood, after their value-system and knowledge had been supplanted with colonial thinking. When these children returned from boarding schools they no longer knew their native language, they were strangers in their own world, there was a loss, a void of not belonging in the native world, nor the white man’s world. In the movie “Lakota Women,” these children are referred to as “Apple Children [red on the outside, white on the inside]” they do not know where they fit in, they were unable to assimilate into either culture. This confusion and loss of cultural identity, leads to suicide, drinking and violence. The most destructive aspect of alienation is the loss of power, of control over one’s destiny, over one’s memories, through relationships — past and future.

The “Indian Removal” policy was implemented to “clear” land for white settlers. Removal was more than another assault on 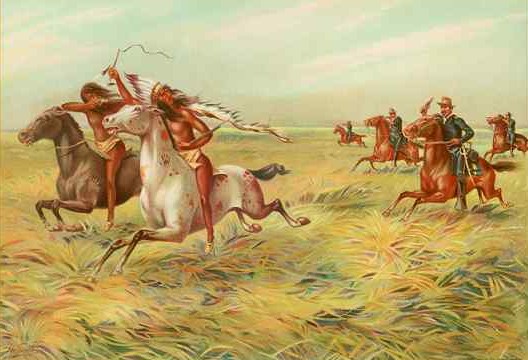 American Indians’ land titles. Insatiable greed for land remained a primary consideration, but many people now believed that the removal was the only way of saving American Indians from extermination. As long as the American Indians lived in close proximity to non-Native American communities, they would be decimated by disease, alcohol, and poverty. The Indian Removal Act began in 1830. Forced marches at bayonet-point to relocation settlements resulted in high mortality rates. The infamous removal of the Five Civilized Tribes — the Choctaws, Creeks, Chickasaws, Cherokees, and Seminoles — is a dismal page in United States history. By the 1820’s the Cherokees, who had established a written constitution modeled after the United States Constitution, a newspaper, schools, and industries in their settlements, resisted removal. In 1938 the federal troops evicted the Cherokees. Approximately four thousand Cherokees died during the removal process because of poor planning by the United States Government. This exodus to Indian Territory is known as the Trail of Tears. More than one hundred thousand American Indians eventually crossed the Mississippi River under the authority of the Indian Removal Act. In the mid-1970s a Choctaw-Tsalagi Indian Health Services doctor was approached by a 26-year-old American Indian woman who desired a “wonb transplant.” She had been sterilized when she was 20 at the Indian Health Service hospital in Claremont, Oklahoma. It was discoverd that 75 percent of the Claremont sterilizations were non-therapeutic, that women American Indians were being prompted to sign sterilization forms they didn’t understand, that they were being told the operations were reversible, and that some women were even being asked to sign sterilization papers while they had yet to come out of birthing sedation.

Common Sense magazine reported that the Indian Health Service “was sterilizing 3,000 Indian women per year, 4 to 6 percent of the child bearing population…Dr. R. T. Ravenholt, director of the federal government’s Office of Population, later confirmed that ‘surgical sterilization has become increasingly important in recent years as one of the advanced methods of fertility management’.” Ravenholt’s response to these inquires “told the population Association of America in St. Louis that the critics were ‘a really radical extremist group lashing out at a responsible program so that revolution would occur’.”

From the beginning of European control there has been an unrelenting drive to commit genocide over another culture. The American Indians were a majority so the Europeans called them an enemy. One of the major facts the United States Government has failed to understand is that the spiritual aspect of life is inseparable from the economic and the political aspects. The loss of tradition and memory will be the loss of positive sense of self. Those reared in traditional American Native societies are inclined to relate events and experiences to one another, they do not organize perceptions or external events in terms of dualities or priorities. This egalitarianism is reflected in the structure of American Indian literature, which does not rely on conflict, crises, and resolution for organization.